Skip to content
Scottish Conservatives
News
We stand with Ukraine

We stand with Ukraine 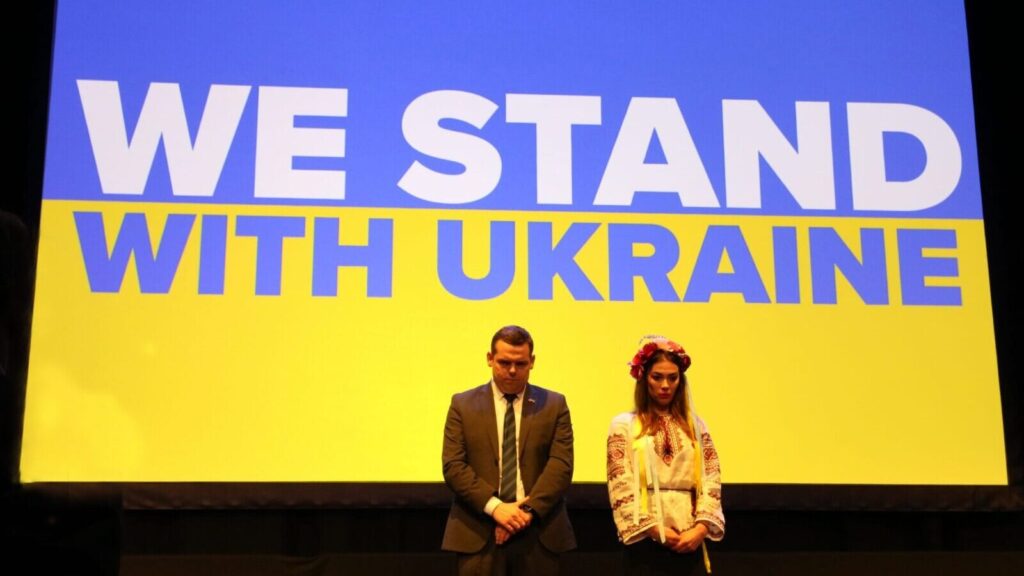 In a deeply moving speech on the first day of the Scottish Conservative Party Conference, Ukrainian-born Scot Zhenya Dove brought home the devasting impact of the war in Ukraine.

Zhenya, a Ukrainian national who now lives in Edinburgh, said her parents still lived in the city of Kherson, which is currently occupied by Russian forces.

She described watching in grief and horror as the landmarks of her hometown have been bombed and destroyed by Russian forces – and thanked the UK for leading the way in assisting the Ukrainian defence.

Zhenya praised the UK for its quick action against Russia, saying that the country had “stepped up” and helped Ukraine “before anyone in the EU had finished their morning croissant”.

Zhenya’s speech, hailed by many at the conference as one of the most moving of their lives, described a life lived in the shadow of an aggressive Russia. From childhood experiences growing up after the collapse of the Soviet Union, to the devastation of the current conflict.

Both the Prime Minister and Scottish Conservative Leader Douglas Ross praised Zhenya’s bravery in sharing her experiences and standing up for her home country – but in her emotional speech, Zhenya said “silence was a luxury she could no longer afford”.

It was an honour to welcome Zhenya Dove to #SCC22 this afternoon for a truly unforgettable speech. pic.twitter.com/ZahjsXmAF2

Describing the conflict, she said, “I didn’t know much about war until recently. One day I woke up and almost everybody I know and loved was in tears – their lives destroyed.

“The main landmark of my hometown now has the Russian flag flown over it.”

Prime Minister Boris Johnson reaffirmed his commitment to supporting Ukraine’s defence in his keynote speech which immediately followed, saying, “We must and will do more.

“We will do more, with more defensive weapons, to help the Ukrainians against these pitiless bombardments.

“More to tighten the vice around Putin’s economy.”

Zhenya also spoke of her pride at being a Ukrainian Scot and her love for her current home of Edinburgh, where she has lived for the last eight years.

She said how proud she was to be able to call herself British, and closed her speech with an impassioned plea.

“Britain [has shown] just how Great it can be. But we can be so much greater.

“The courage and bravery displayed by the Ukrainians is something to behold and applaud. My countrymen are 21st Century Spartans, I beg you, please don’t let them die like their spiritual ancestors.”