Time to back Right to Recovery in fight against drug deaths 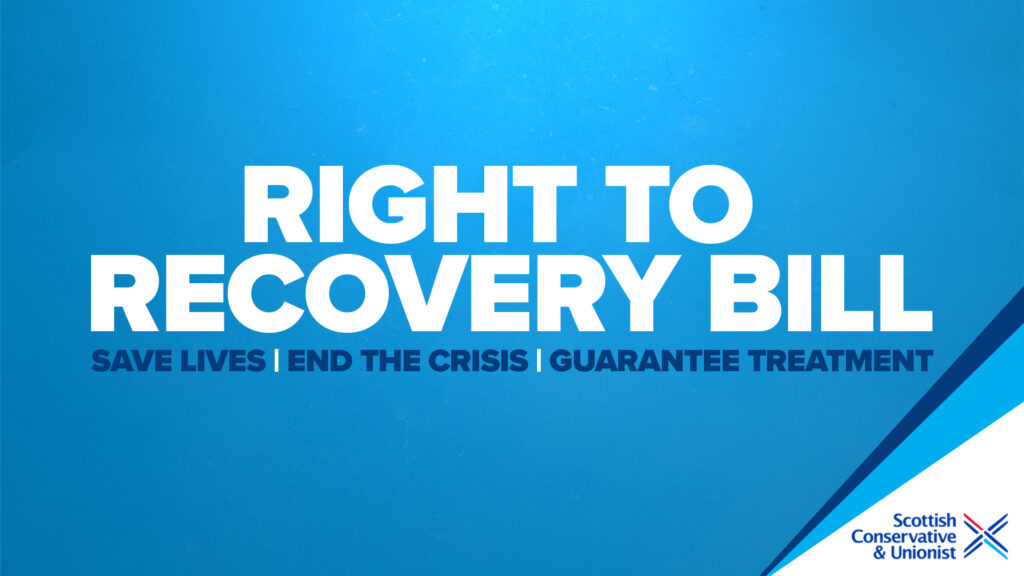 The SNP Government have today been urged to back the Scottish Conservatives’ Right to Recovery Bill in a bid to tackle the nation’s drugs death crisis.

Public consultation on the Bill – which would enshrine in law the right of everyone with an addiction problem to receive life-saving treatment – closed last night.

The responses to Right to Recovery have been overwhelmingly positive, with support coming from a host of experts in the field of addiction and politicians from other parties.

Speaking in a Scottish Government debate in Parliament on Scotland’s drugs crisis, Shadow Public Health Minister Sue Webber called on the SNP to throw their weight behind the Bill immediately.

“It’s a national tragedy that Scotland has the worst drugs-death statistics in Europe – and we have a moral duty to take urgent action to address it.

“Right to Recovery is a common-sense, practical Bill drawn up in consultation with experts in the field of fighting addiction and it would make a real difference in tackling a national crisis.

“Currently, too many vulnerable people with addiction problems are unable to access the help they need, including, but not limited to, residential rehab treatment.

“This legislation would right that wrong and enshrine in law everyone’s right to receive the potentially life-saving treatment they need.

“The response to the three-month consultation on Right to Recovery has been overwhelmingly positive, with enthusiastic backing from a host of charities, support groups and politicians from other parties.

“This shouldn’t be a narrow party issue, this isn’t about political point-scoring, it’s about finding solutions to a national emergency.

“I’d urge the Scottish Government and politicians of all parties to support Right to Recovery, so that we can get it on the statute book as soon as possible.”

The consultation closed on January 12, 2022. We will look to publish the responses to it soon.

The principle which underlies the proposed Bill is to ensure that people who are addicted to drugs (and/or alcohol) are able to access the necessary addiction treatment they require.

In order to achieve this, the proposed Bill will enshrine the right to necessary addiction treatment in Scots law. It would place an obligation on NHS Health Boards, Scottish Ministers and others, as appropriate, to provide treatment and set up reporting arrangements so that the quality and access of treatment provided can be monitored and reported to the Scottish Parliament. This will ensure that individuals may access a preferred treatment option unless it is deemed to be harmful by a medical professional.

Scotland’s drug death rate is three-and-a-half times worse than the rest of the UK and the worst in Europe. In 2019, the Scottish drug death rate stood at 234 drug-related deaths per million, compared with 65 per million for the UK. When compared with the rest of Europe, Scotland also has the highest number of drug-deaths per capita, with the next largest death rate coming from Sweden and Norway. (NRS, Drug Deaths in Scotland 2020, 30 July 2021, link).