Number of police officers in Scotland falls to a record low 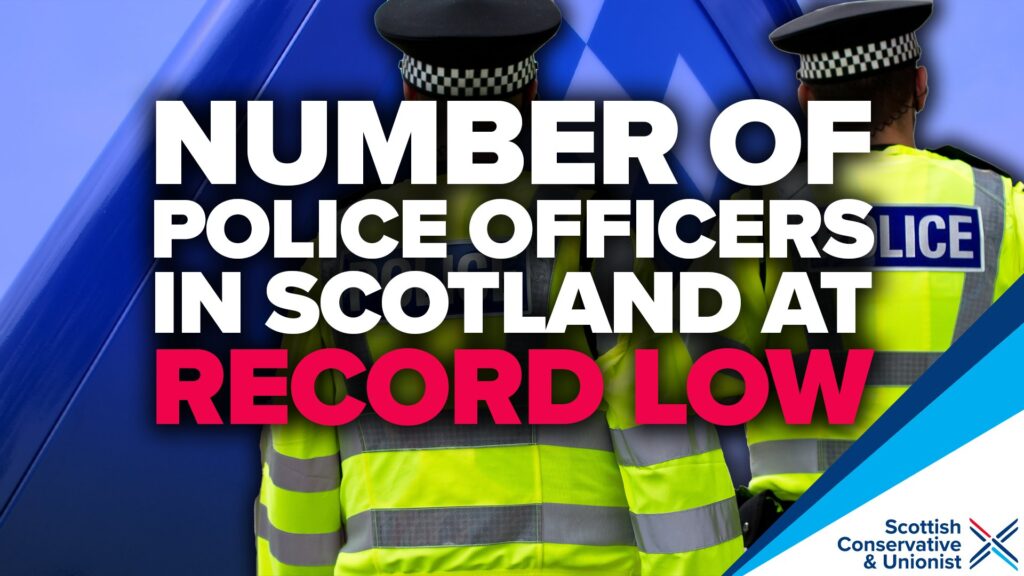 New statistics released this week reveal that the number of police officers in Scotland has plummeted to its lowest levels since March 2009.

The SNP’s police merger dismantled policing as we know it. Since Police Scotland’s creation in 2013 more than 600 frontline officers have disappeared from the frontline, over 100 stations have been forced to close their doors, and violent crime has risen five years in a row.

SNP cuts are risking public safety by forcing the police to fight crime with one hand tied behind their back. pic.twitter.com/DMrQYEOVYD

With 12 out of 13 local divisions now having fewer police officers than before the merger, local communities across Scotland are having to make do with fewer officers responding to calls and patrolling on foot.

This disappearance of local police has not gone unnoticed either, with only 37% of Scots saying they are aware of regular police patrols now compared to 56% in 2012-13.

The result? Crime that has been steadily rising over the last five years. Last year alone we saw increases in crimes such as attempted murder, rape and sexual assault.

For any government, this should be a wake-up call to take action and back their police service.

But in the most recent budget, Scotland’s police were sold short by the SNP government, who instead handed them a real-terms cut to their capital budget.

Since 2018, almost two million calls to Police Scotland were abandoned.

Instead of cutting the police capital budget this year, the SNP need to listen to our calls to increase it and give police the resources they need. pic.twitter.com/a1Qwo9kFBZ

That refusal to boost spending has undermined new programmes, such as the rollout of body-worn cameras which are vital to securing prosecutions, boosting accountability and keeping the public safe.

It also means that police are left to make do with crumbling police stations, some dating back to the 1950s, which the Scottish Police Federation have warned are not even air or watertight.

“It’s little wonder violent crime is rising when police officers across Scotland are being asked to fight crime with one hand tied behind their back by the SNP Government.

“Our police work tirelessly day and night to keep the public safe, yet they are being let down appallingly.

“First, they get hit with a real-terms cut to their capital budget, and now we learn there are fewer officers patrolling our streets than at any time since the SNP merged Scotland’s police forces.

“These unacceptable cuts are putting public safety at risk.

“To bolster Police Scotland and help them keep the public safe, the Scottish Conservatives have proposed a Local Policing Act.

“The policy would ensure that police have the equipment and staff they need to fight crime and give a voice to local people with greater community input to bring an end to years of SNP mismanagement.”