Our Local Policing Act will put bobbies back on the beat. 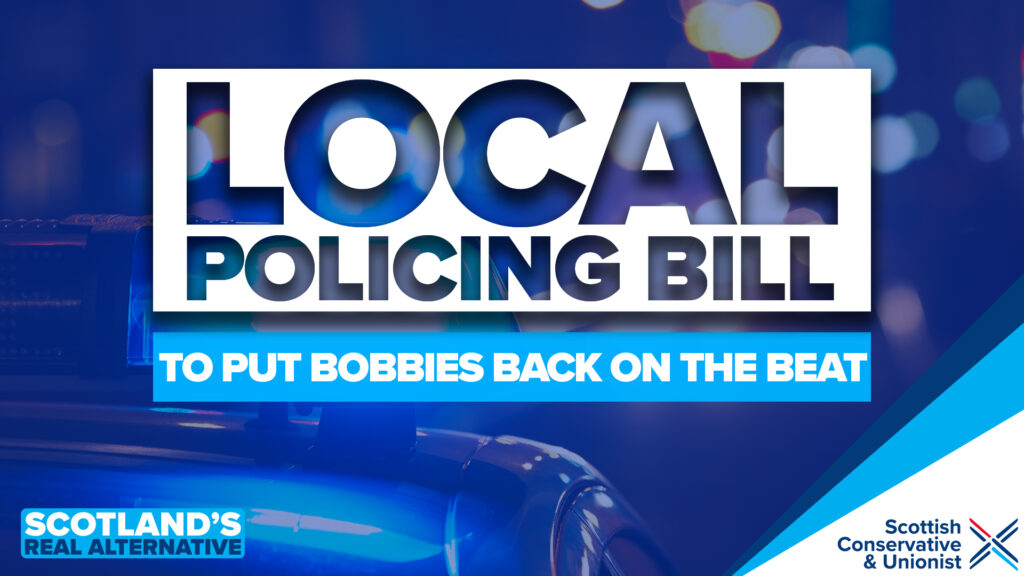 Police numbers in Scotland have dropped below 17,000 for the first time since 2008. Official figures released by Police Scotland show that there were just 16,805 full time police officers employed by the service as of 31 March 2022. This is the lowest number recorded in Scotland since Q4 of 2008 where 16,675 officers were employed full-time in Scotland.

The SNP Government’s latest budget reduced Police Scotland’s capital funding in real terms. The Scottish Conservatives called for a £35.6 million increase in capital funding for Police Scotland to spend on upgrading vehicles, stations and crime-fighting equipment. However, they have not provided any extra money to the Scottish Police Authority’s capital budget allocation this year and it remains at £45.5 million – a real terms cut.

Rising violent crime and falling numbers of police patrolling our streets demonstrate the need to boost local police patrols to deter crimes. A Local Policing Act would require Police Scotland to set local targets for the number of hours police spend patrolling the streets and report on their progress.

More than 100 police stations have closed since the formation of Police Scotland and hundreds of frontline officers have been lost during the same period. Our Local Policing Act would ensure all communities across Scotland have a visible police presence by ensuring adequate resources reach local police stations and divisions. That, in turn, would make people feel safe in their communities.

Our Local Policing Act will ensure our police have the equipment and staff they need.

We must ensure more officers are on the streets, instead of filling office vacancies, by adequately investing in support staff. We would support special constables and review their remuneration. We would also provide the full amount of capital funding which Police Scotland requested this year to invest in proper IT systems and the buildings and vehicles they need to operate effectively.

Our Local policing Act will give local communities a voice.

Communities have raised concerns that policing decisions are not subject to enough local engagement and scrutiny. Our Local Policing Act would establish new formalised links between local communities and police to allow for greater public input into the policing decisions that affect them.