STRONGER for Scotland? Try telling that to our island communities still waiting for the lifeline ferries they were promised would be ready years ago by Nicola Sturgeon and Co.

Try telling that to those employed past and present in shipbuilding who are watching in horror as the contract for the next two desperately-needed vessels is given to a Turkish firm because a Clyde-side yard isn’t deemed fit to bid by the very government that owns it.

And try telling that to the Scottish taxpayer being fleeced to the tune of £250 million – and rising – because of the SNP Government’s catastrophic decision to award the contract to build Glen Sannox and Hull 802 to Ferguson Marine back in 2015.

The SNP’s self-satisfied slogan is now so self-deluded it’s a joke.

For years, the word ‘ferry’ has been synonymous in the public’s mind with SNP failure, but it’s only now as more facts and figures emerge, and the Scottish Government’s obfuscation and spin grow ever more desperate, that people are realising the full extent of this scandal.

And the more Nicola Sturgeon and her ministers seek to shut down debate on the issue, the more questions they create over this inexplicable procurement decision.

The overriding unanswered question is this: Why did the Scottish Government give the contract to Ferguson Marine when CMAL flagged up in neon lights their misgivings about the lack of financial protection afforded the taxpayer by the company?

Nicola Sturgeon has been quick to dismiss the incendiary claim of former Ferguson chief Jim McColl that his firm landed the deal, minus the usual safeguards to the public purse, because the SNP were keen to rush out what looked to be a positive news story in time for their 2015 party conference.

The trouble with the First Minister’s denial is that she can offer no alternative explanation. Neither can Audit Scotland – who published a damning report on the procurement process last week – because there was “no documented evidence” of why such a flawed decision was taken.

If the Scottish Government were convinced their judgment and the motives behind it were sound, why could Audit Scotland find no paper trail to that effect.

It’s telling that – despite Nicola Sturgeon’s absurd claim yesterday that “due diligence” was followed – SNP ministers can offer no plausible justification for a decision that has seen the cost of building the two ferries spiral more than two-and-a-half times the original £97million quoted.

Instead, all they have been able to resort to is a crude blame game over who was responsible for signing off the contract. 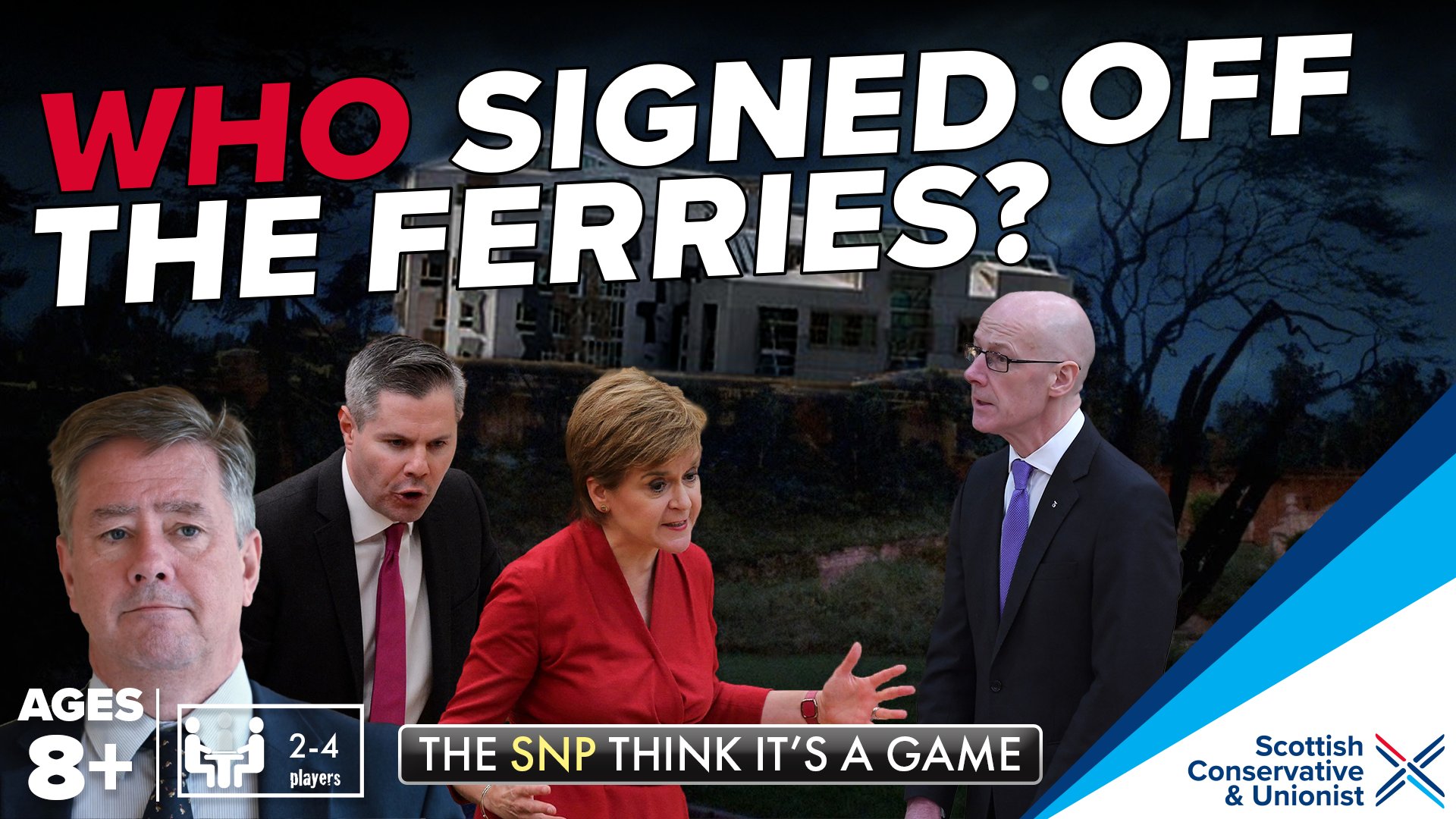 At First Minister’s Questions last week, Nicola Sturgeon thought she had the perfect scapegoat, in disgraced former minister Derek Mackay. He was duly thrown under a bus and an email was issued by the Scottish Government dated October 8, 2015 purporting to show the approval of the then Transport Minister being sought for the Ferguson deal.

Sadly, for the First Minister, this line unravelled rather more quickly than the erroneously-installed cables in the Glen Sannox which have set its completion date back even further.

Because the decision to award to Ferguson the contract was already a done deal long before that date. Another, earlier, email – dated August 20, 2015 – soon emerged showing sign off being sought from Derek Mackay’s then-boss Keith Brown, because the former was on holiday.

And, of course, Nicola Sturgeon herself appeared in Port Glasgow on August 31 to publicly announce Ferguson Marine as the preferred bidder.

With Deputy First Minister John Swinney in charge of the purse strings as then Finance Secretary, three of the most senior members of the current SNP Government have their fingerprints all over this reckless deal.

So much for Derek Mackay being the patsy. When faced with such incontrovertible evidence, Health Secretary Humza Yousaf had little option but to recant from Operation Blame Mackay when questioned by the BBC on Sunday.

Yet yesterday, when Kate Forbes was put up as the latest human shield for the First Minister there was another pivot and Derek Mackay was again made to carry the can by his former colleagues.

None of this stacks up because the government’s line is changing from one implausible excuse to another. Ministers are tying themselves in knots to such an extent that the First Minister actually uttered the pitiful line “I didn’t say ‘don’t go ahead” when questioned further yesterday

The pitiful excuses are getting embarrassing now @NicolaSturgeon pic.twitter.com/RxHM5JBDh5

The reason for these contortions is that this issue really matters. Our ferries are not just a gateway for tourists to visit some of Scotland’s most beautiful islands, they are absolutely essential to those who live there.

Islanders rely on them for vital NHS treatment on the mainland, for getting to school, for importing vital business supplies. A fully-functioning ferry service is not a luxury, it’s a necessity.

And it’s clear from the patchy, scaled-back services being offered on some routes that the ageing CalMac fleet is not fit for purpose. That’s why these ferries – which in the latest best-case scenario will be five years late when they are finally able to take passengers – are so desperately needed.

That’s before, of course, we even consider the final taxpayer bill, which some experts are predicting could come in at £400million.

So, this is far more than just a government embarrassment – it’s a national scandal which impacts hugely on people’s lives.

We need the truth about this whole shameful episode uncovered, however much the SNP may wish to avoid scrutiny of their illogical and damaging action.

My party believes a full, independent public inquiry is essential – and we will also exhaust every parliamentary avenue to get answers on behalf of the Scottish people from those who have let them down so badly.

After the spin, deceit and cover-up they have deployed since the publication of Audit Scotland’s report last week, they have some nerve advocating their transparency.

But then again, it’s not the first SNP boast to ring painfully hollow.

Leader of the Scottish Conservatives