Sturgeon in denial over need for mass vaccination centres 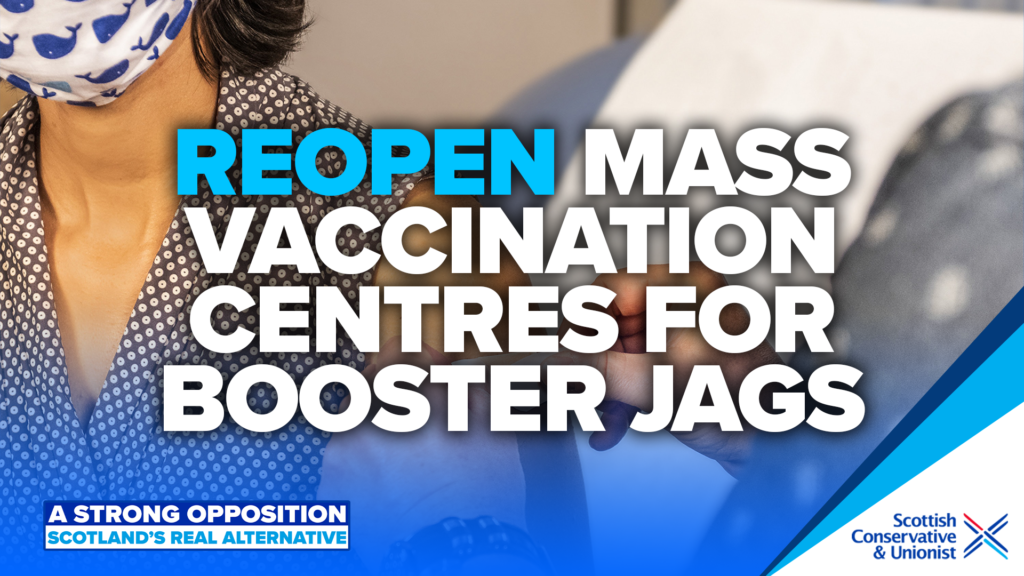 Nicola Sturgeon is “in denial” over the need for mass vaccination centres to speed up the booster jag rollout, the Scottish Conservatives have said.

At First Minister’s Questions, Scottish Conservative Leader Douglas Ross praised the overall success of Scotland and the UK’s vaccine scheme but highlighted recent issues that have seen people across Scotland turned away from getting a Covid jag.

Some people were refused a vaccine yesterday despite the Scottish Government encouraging people who had just become eligible for a vaccine to come forward earlier this week.

On Tuesday, the First Minister called on the public to bring forward their planned booster jag appointments, following a change in JCVI guidance to recommend a shortening of the timescales between vaccines.

Also on Tuesday, the National Clinical Director Jason Leitch was telling people on Twitter that if they turned up for their booster, they would receive it, even if their previous dose was less than six months ago.

On Monday, the Chief Medical Officer Gregor Smith told everyone who is eligible to “book an appointment and get vaccinated as soon as possible”.

“A year ago today, the UK became one of the first countries in the world to approve a Covid vaccine.

“Since then, 10 million jags have been delivered to people across Scotland. I want to thank all the frontline staff and volunteers who have made that happen.

“But in recent days, people who tried to get a vaccine have been turned away. The SNP Government insists everything has been sorted, but we are still hearing of people being refused vaccines.

“This problem was avoidable if the government put the proper protocols in place before making announcements. The lack of planning from the SNP Government has led to confusion when the public really needed clarity.

“Even though there is a backlog of close to two million people waiting to get their jag, we still don’t have a detailed plan from the SNP Government about how they will speed up the booster jag rollout at this critical moment.

“Nicola Sturgeon is in denial about the problems her government’s poor communications have caused, and about the need for mass vaccination centres to accelerate the pace of the vaccine rollout.

“They must open mass vaccination centres, if not on the scale of the Hydro or P&J Live, then they should at least be looking at launching major clinics in town halls across Scotland.

“The SNP Government needs to show the same urgency to rolling out the Covid booster programme as was the case in delivering the first and second doses.”