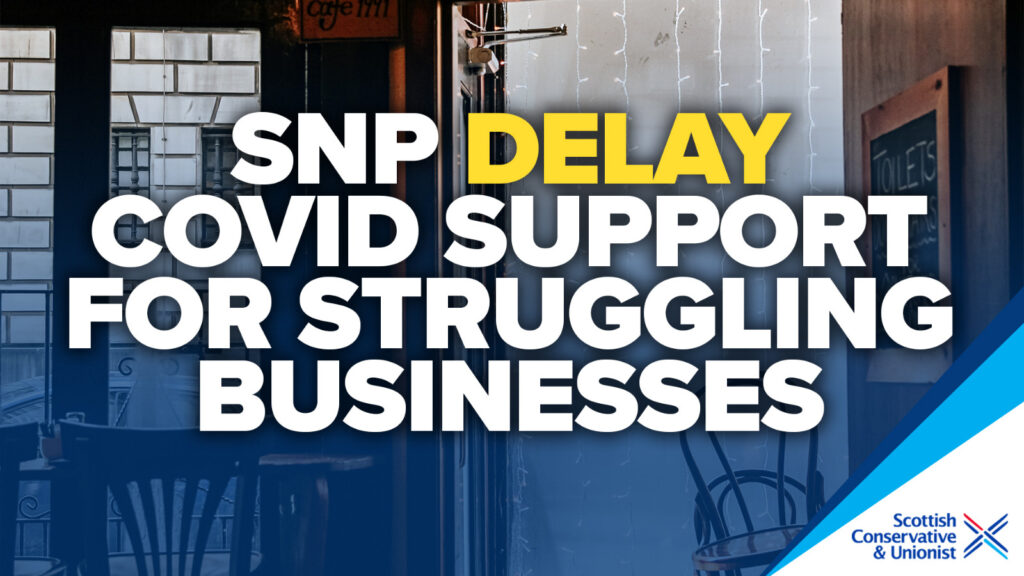 The Scottish Conservatives have accused Nicola Sturgeon of failing Scottish businesses over the “snail’s pace” delivery of financial support to those hit by the SNP’s Covid restrictions.

At First Minister’s Questions, Douglas Ross insisted many hospitality businesses were on the brink of collapse because they were still waiting on compensation – provided by the UK Government – that Nicola Sturgeon had promised to get to them before Christmas.

For the SNP, Scottish jobs and businesses are always an afterthought👇 pic.twitter.com/lqXRUcRWGJ

He challenged the First Minister to reveal how many firms had received grants to date. She declined to answer but put the delays down to checks required to ensure that applications weren’t fraudulent.

Douglas Ross also questioned why Nicola Sturgeon had extended emergency Christmas restrictions by a further week and was planning to expand her government’s vaccine passport scheme when the data on Omicron was much more positive than previously predicted.

“The First Minister promised on December 14 that she would do everything possible to get vital financial support to businesses affected by her Covid restrictions before Christmas – but she’s failed.

“A month on, many businesses are telling us they still can’t even apply for funding, never mind get the cash they need to survive.

“The process is going at a snail’s pace. One business group said yesterday that, ‘not a single penny of the funding we were promised before Christmas has reached businesses’.

“Now, a month after the funding was announced, John Swinney says ‘it is difficult for me to give a precise timescale’ on when this money will be paid.

“The SNP are quick to demand more funding from the UK Government but incredibly slow to get it out the door to businesses, many of whom are on the brink and simply can’t afford to wait a month.

“This week, businesses were dealt another blow when restrictions on them were extended by a further week without any clear supporting evidence.

“The Omicrom data is now far more positive than the First Minister’s projections, yet hospitality businesses are still being held back by her government and now she’s threatening business with a wider vaccine passport scheme.

“When our economic recovery is so fragile, this just isn’t good enough. For this SNP Government, Scottish jobs and businesses are always an afterthought.”