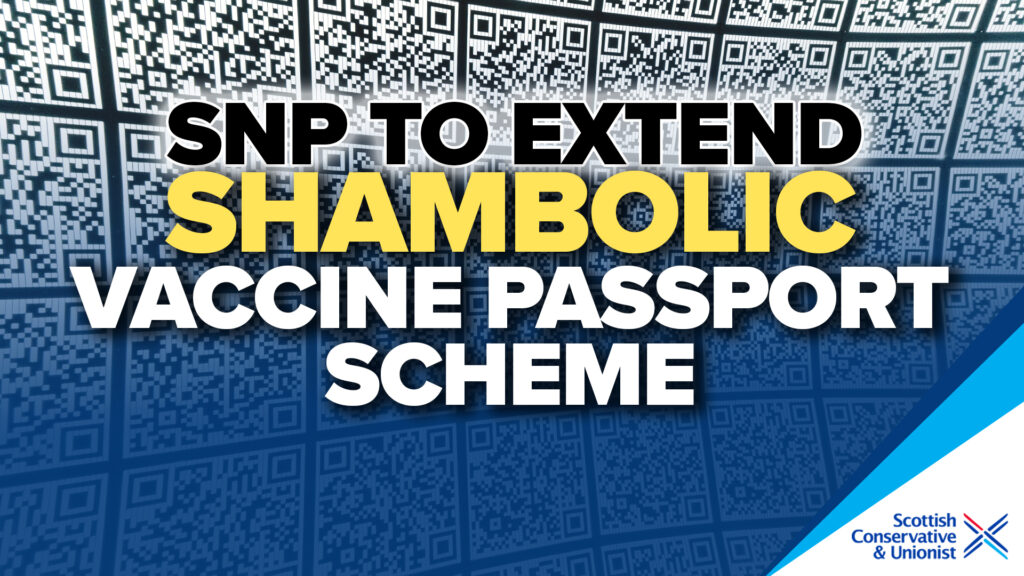 DOUGLAS ROSS has criticised the First Minister’s announcement that she is considering extending the SNP’s controversial vaccine passport scheme.

In her latest Covid update statement to Parliament on Tuesday (Jan 11), Nicola Sturgeon gave the green light for sports fans to return to outdoor events – but only on the proviso that at least half of the crowd are asked to show proof that they have been jabbed as a precondition of entry.

She also raised the prospect of expanding vaccine certification requirements to more businesses, despite criticism from the night-time sector – which has been saddled with them since the autumn – that they have resulted in a huge drop in takings and staff being verbally abused by frustrated customers.

In addition, an evidence paper published by the SNP Government in November failed to offer any proof that the policy had achieved its goal of increasing vaccine uptake.

As a result, Douglas Ross expressed dismay at the First Minister’s announcement, particularly as it came against a backdrop of more encouraging figures on the spread of Omicron.

“The latest data shows that we are in a far more positive position than the government was expecting.

“The projections in December have not come to pass. We may have already passed the peak of Omicron.

“That’s why it is so disappointing to see the government again looking to extend the vaccine passport scheme.

“Scottish businesses, jobs and our economy are set to be hit harder – even though the data is more positive.

“The government cannot even prove that this scheme reduces the spread of the virus.

“This move will have damaging consequences across our economy.”

The data on Covid is more positive. It's not because of government restrictions – but because of the public’s good sense.

It was the people of Scotland that got this right, not the SNP Government 👇 pic.twitter.com/C66guV0zqr

“The success of Scotland and the UK’s vaccination scheme is clear.

“The actions of the general public have worked. People across Scotland got their booster. Took tests. Self-isolated when they needed to. They were cautious to protect their families’ health, and especially careful around the vulnerable.

“That’s why the data is more positive. It’s not because of government restrictions but because of people’s good sense. The people of Scotland got this right, not the government.

“By now, people understand what’s necessary to combat this virus. We have to trust their judgement more as we move forward.

“We should now be looking to get a balance that is much more in favour of our economy and wider public health concerns around physical and mental health.”