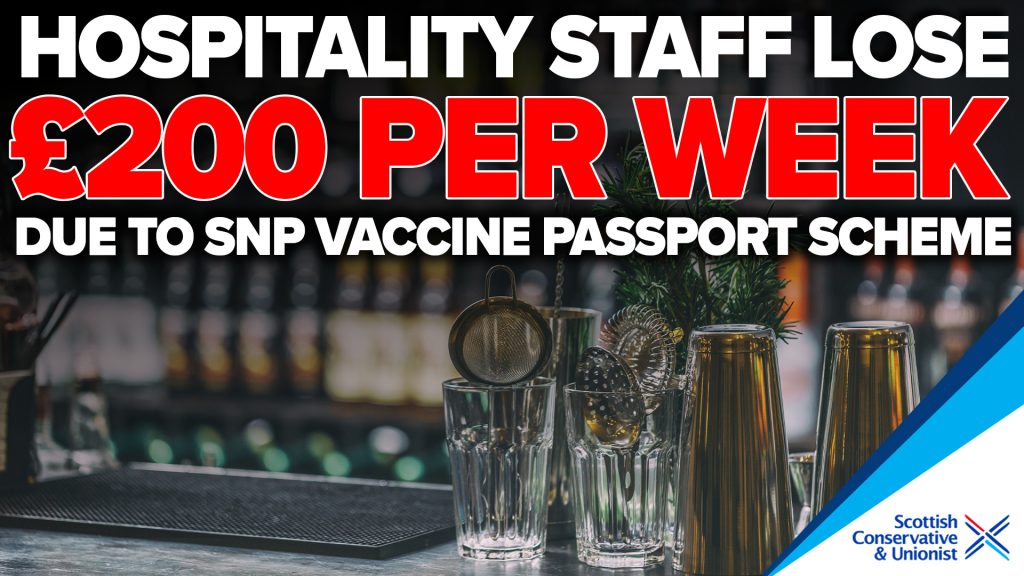 The Scottish Hospitality Group have warned that bar and nightclub workers could lose up to £200 a week under the SNP’s vaccine passport regulations.

In a letter to the Scottish Conservatives, Scottish Hospitality spokesman Stephen Montgomery said if venues are forced to close early because of the inconvenience of the new rules, many hospitality workers would miss out on up to three hours of wages each night – the equivalent of £200 per week.

This has been made worse by the SNP’s ‘inaccurate and unreasonable’ definition of a nightclub – which has affected approximately 2000 Scottish businesses, despite the fact that only around 120 of these would traditionally be viewed as nightclubs by the public.

In the letter, Stephen Montgomery stressed that he had written to Cabinet Secretary for Finance and Economy, Kate Forbes and Minister for Business, Ivan McKee, about his concerns last week, but had yet to receive a reply.

“The SNP’s handling of the vaccine passport scheme has been farcical, but we must not forget its devastating financial impact on hardworking Scots.

“The SNP has pressed ahead with an inaccurate and unreasonable ‘nightclub’ definition, which has captured thousands of pubs and bars that do not have the staff or the capacity to carry out these checks.

“These venues now have no choice but to close early and lose out on hours of revenue, costing their staff dearly.

“The SNP Government has introduced a de facto curfew on these businesses – yet they have refused to even acknowledge the financial damage their scheme is doing, let alone offer financial support for workers and businesses.

“The SNP must urgently fix or scrap this unreasonable and shambolic policy, or risk ruining even more Scottish livelihoods.”