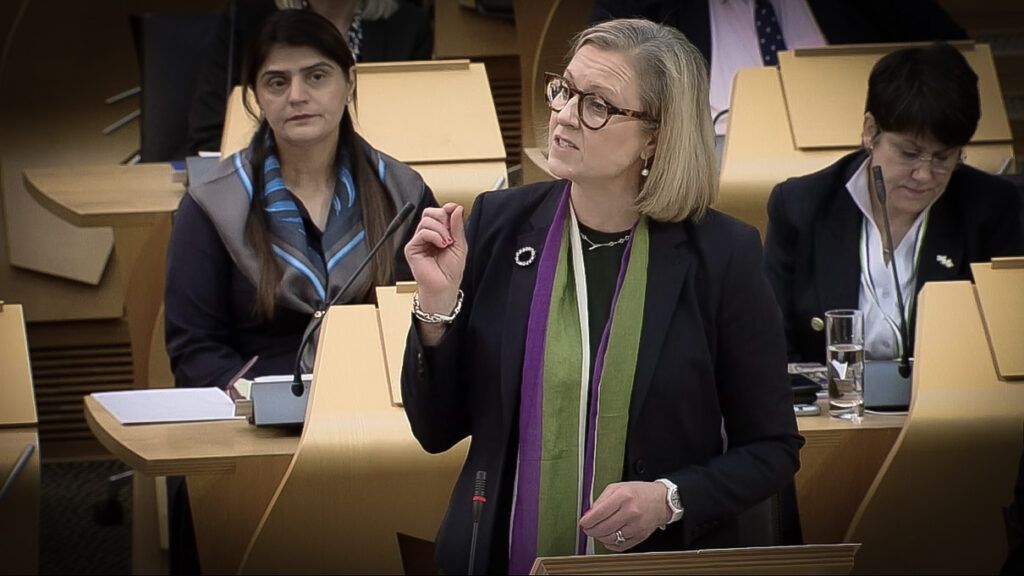 THROUGHOUT this entire debate, the SNP have tried to present their Gender Recognition Reforms as a niche administrative issue. A couple of tweaks to existing laws that will affect only a tiny minority of people – yet vastly improve the rights of an oppressed and marginalised group.

But laws can’t be made in a vacuum. And the rights and safety of one group of people should never be sacrificed for the sake of another.

The SNP say that their changes make the process of obtaining a Gender Recognition Certificate and changing one’s gender in the eyes of the law easier and less intrusive for trans people.

“In practice, this means giving predatory sex offenders another potential avenue through which to access women and girls.”

However, while I think every MSP in the Scottish Parliament yesterday agreed with this aim, the fact is that the SNP’s changes have also made it vastly easier for everyone and anyone to change their gender.

This is the crucial point that the SNP, Labour and Liberal Democrats have refused to acknowledge throughout. By removing vital safeguards within the gender recognition process, the SNP have opened the door for anyone acting in bad faith to exploit the process.

In practice, this means giving predatory sex offenders another potential avenue through which to access women and girls.

The SNP and their supporters have claimed that there is no evidence that this will ever happen. Yet they have utterly failed to explain why this process alone will be immune to abuse from predatory men, when we all know the lengths that sex offenders will go to, to access their victims.

And thanks to a court ruling last week, we know that a Gender Recognition Certificate can potentially grant access to women’s spaces and protections – in spite of all the Scottish Government’s claims to the contrary.

“The fact that women may now have to fear attack even within  supposedly safe spaces is shameful.”

The court ruling, of course, referred to anti-discrimination laws, but this week, analysis from the UK Constitutional Law Association also confirmed that this could apply to women’s spaces.

The SNP have repeatedly claimed that violent men do not need a Gender Recognition Certificate to target women – and that the levels of violence women face will be unaffected by these reforms.

Not only is the notion that violence against women is a ‘given’ in our society deeply insulting and depressing in itself, but this oft-repeated mantra completely misses the central point of women’s concerns.

For women, single-sex spaces offer a rare relief from the threat of violence from men. The fact that women may now have to fear attack even within these supposedly safe spaces – thanks to the SNP, Labour and the LibDems – is shameful.

So how can the Scottish Parliament pass a bill that risks making women less safe? pic.twitter.com/goqgPc78x7

Perhaps even more unforgivable has been this coalition’s move to lower the age limit at which someone can apply for a Gender Recognition Certificate. This was in spite of significant evidence that the decision to legally change gender is not neutral and reversible but could set teenagers on a path to making irreversible changes at a worryingly young age.

Evidence which I found extremely powerful with my teenage daughters in mind.

These are just tip of the iceberg when it comes to the potentially harmful, unintended consequences of this Bill.

Over the last three days, my colleagues and I have spent more than 24 hours debating this rushed and shoddy lawmaking.

Yet every single Scottish Conservative amendment aimed at retaining or improving vital safeguards in this process was voted down by the SNP. They even voted down our common-sense proposals to stop convicted sex offenders from abusing the gender recognition system they are so eager to improve.

The concerns of women and girls – which the First Minister blithely dismissed as ‘not valid’ over a year ago – have been ignored and dismissed throughout this process.

As a result and despite the best efforts of my Scottish Conservative colleagues and MSPs all across the Chamber, the Scottish Parliament has just passed laws which have opened up women, girls and vulnerable young people to harm.

Nicola Sturgeon’s Gender ID Bill has been pushed through with the help of Labour and the Liberal Democrats, despite grave fears over women’s rights and safety.

The Scottish Conservatives were the only party where the majority of MSPs opposed these divisive reforms. pic.twitter.com/kXcg3RxcWR

Find out more about what the Scottish Conservatives are doing to stand up for women’s rights. →