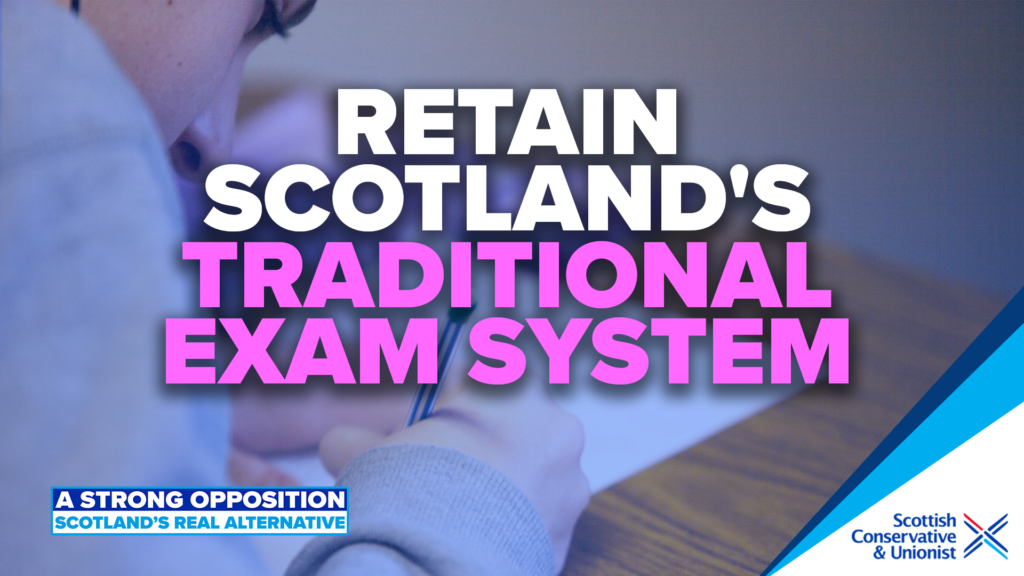 Anyone watching or listening to the SNP’s latest lacklustre, visionless monologue on the state of Scotland’s Education System could be forgiven for believing all is well.

While the bombastic tone and faux outrage that came to define John Swinney’s time in the Education hot seat has gone, it hasn’t been replaced by anything better.

He made way for the more measured and technocratic style of Shirley-Ann Somerville – but the same flawed approach rooted in deep denial persists. And there can be no doubt it is shamefully failing the next generation and selling our country short.

While the SNP hide behind some international experts and ignore home truths, our hardworking teachers, pupils and their parents continue to pick up the slack and make the best of a system that works against them, rather than for them.

Despite setting out to Parliament a pedestrian timetable for what looks set to be the biggest shake-up in education policy in a decade, there was no admission that this could be avoided if the SNP had actually delivered on their promises to make education their top priority.

Nor was there any recognition that many of the issues being addressed were problems. Instead it sounded like this was a government making a few tweaks here and there. Not that an international body, following years of pressure from opposition parties had come in and despite SNP attempts to stage manage the process had still found serious failings. Nothing. Just business as usual.

The sad thing is that if the SNP were half as good at creating successful learners as they are at announcing new working groups and consultations, then Scotland would be leading the international pack. Instead we are middling – average at best when it comes to key comparisons. Where once we stood tall, out-performing the other nations of our United Kingdom, we now lag behind Wales and Northern Ireland, and instead find ourselves jostling for position with countries like Slovenia.

The level of denial is breathtaking.

How any nationalist can look at their 14 years of failure in education and claim to be proud is beyond me.

Far from giving us the answers, successive SNP ministers are the problem. They and they alone have allowed our once world leading education system to be slowly dismantled on their watch. They have been the cheerleaders of this flawed approach, driving us away from the tried and tested methods and Scottish educational traditions that we all know work.

The SNP’s Curriculum for Excellence has misguided priorities. It has gone off track from its original intentions. It is a bureaucratic mess, with teachers somehow expected to wade through thousands of pages of guidance. Worst of all, the SNP abandoned our traditional knowledge-based curriculum. Who wants our kids to enter the world without a basic grasp of history or an understanding of the world around them?

The strong Scottish exams system is the last hallmark of our historic, internationally-renowned school system. Now the SNP are considering throwing away those proud traditions too. Sneaked in towards the end of a dull statement was the announcement the government want to bring about the end of exams as we know them but of course there is no detail or strategic leadership when it comes to proposing an alternative. Instead, we simply get the start of another consultation.

Surely instead of doubling down on yet more ill-thought our radical reform it is time the SNP admitted its education experiment has been a mistake?

Rather than seeking to be different just for the sake of it, we should return to doing what works.

We should be doing what Scottish education has historically been so good at, and focus more on solid knowledge-based teaching and learning, not radical reforms that only provide the SNP with a smokescreen to distract from their own dire report card.

This article originally appeared in the Scottish Daily Mail on 28th October 2021.