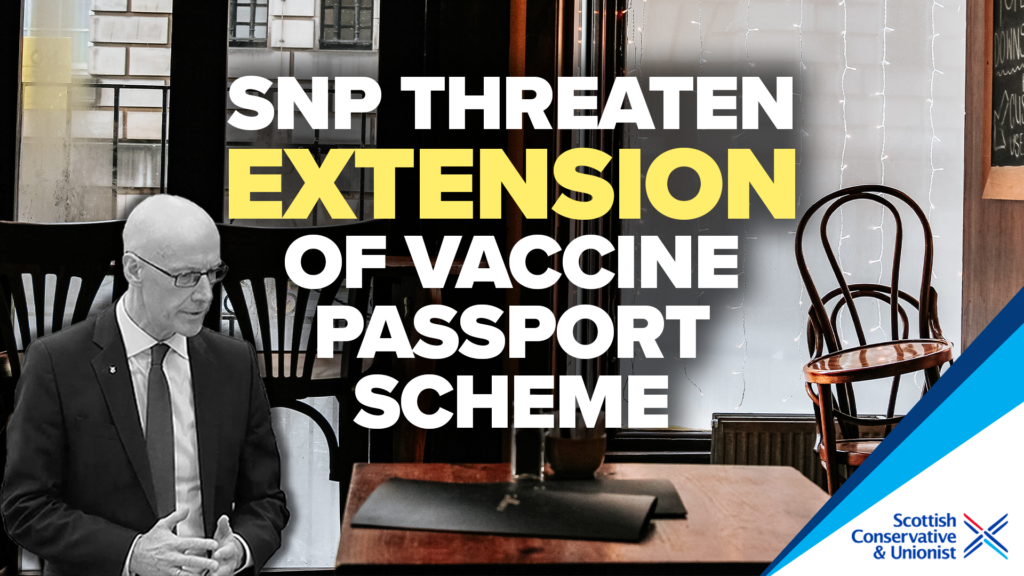 The SNP have been accused of “creating uncertainty” by warning that the vaccine passport scheme may be extended.

In Tuesday’s Covid update, Deputy First Minister John Swinney said the government was considering expanding the vaccine passport scheme and the use of face masks.

Scottish Conservative Leader Douglas Ross asked if the SNP intended to continue the use of face masks in Scottish schools throughout winter, despite the Scottish Government’s own advisory sub-group on education saying in early October that the ‘time was right’ to end the use of masks in classrooms. John Swinney did not answer.

Douglas Ross also asked why the SNP intended to extend the vaccine passport scheme when they had no data to show it had reduced the spread of the virus, and which premises it may be expanded to include. John Swinney also dodged answering those questions.

Last week, John Swinney admitted that he had no evidence that the Covid vaccine passport scheme was working.

So why is he now hinting at expanding it?👇 pic.twitter.com/37Cychg6jX

“Scotland and the UK’s vaccine scheme has been immensely successful – and it should be our main weapon against the virus. Considering reintroducing restrictions at this stage in the pandemic is the wrong approach.

“John Swinney is creating uncertainty with these vague warnings. He talked up the prospect of expanding restrictions on businesses without providing the necessary details about who it might impact or when.

“The SNP Government doesn’t know if their vaccine passport scheme is working, so why are they looking at expanding it? It’s a mind-boggling way to make policy. They’re inventing it on the hoof.

“They’re drip-feeding hints that they might expand the scheme without having the decency to inform the businesses that could be on the cusp of being hit by added costs and extra hassle.

“John Swinney struggled to explain why the government is keeping face masks in schools when their own experts said the ‘time was right’ to stop using them in classrooms more than a month ago.

“Face masks disrupt the learning experience. They make it more difficult for teachers, and pupils, especially vulnerable pupils, suffer because of them. Schools should be at the front of the queue for removing restrictions, not the back.”