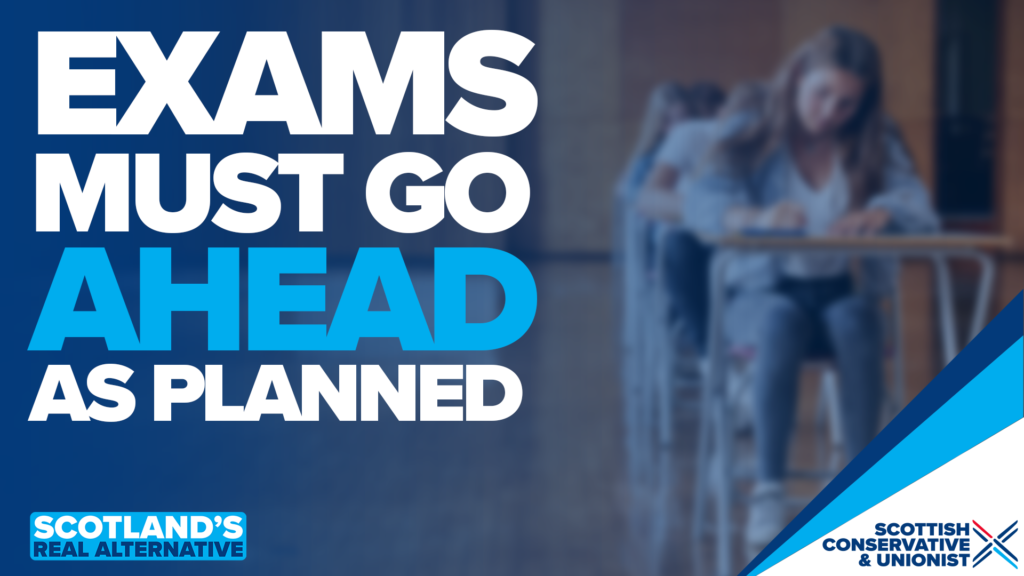 The Scottish Conservatives will today force a vote in parliament demanding that school exams go ahead this year.

Shadow Minister for Children and Young People, Meghan Gallacher insists Nicola Sturgeon should be “ashamed” of her government’s education record and says the SNP must guarantee that exams won’t be cancelled for a third year running.

It comes after the Education Secretary Shirley-Anne Somerville revealed last week that there were no Covid contingency plans in place to ensure they will go ahead this spring.

The Scottish Conservatives believe that after two years of chaos and cancellation, teachers, pupils and parents need certainty from the Scottish Government that exams will definitely take place.

The party, who are using their opposition time to lead the debate, are also calling on the Scottish Government to finally make education their top priority and tackle the widening attainment gap that is harming children from disadvantaged backgrounds.

Today, we are forcing a vote demanding that the SNP guarantee exams go ahead this year.

After two years of chaos and cancellations, teachers, pupils and parents need certainty they will definitely take place. pic.twitter.com/3WtGzs8696

“When she became First Minister, Nicola Sturgeon asked to be judged on her education record. On that basis, she should be ashamed of herself.

“It is essential that exams finally go ahead this year – and the SNP Government must commit to them being held. Pupils, teachers and parents have suffered enough anxiety, frustration and confusion after two years of cancellations.

“The Education Secretary revealed last week that the government had no contingency plans in place to hold exams at alternative venues, in the event of Covid restrictions, and that no money had been set aside for this. That’s deeply concerning because cancelling them cannot be an option.

“The SNP’s record on education is a tale of broken promises and failed reforms.

“Scotland once led the way in education but standards have fallen dramatically after 15 years of SNP rule – and it is children from disadvantaged backgrounds who are suffering most.