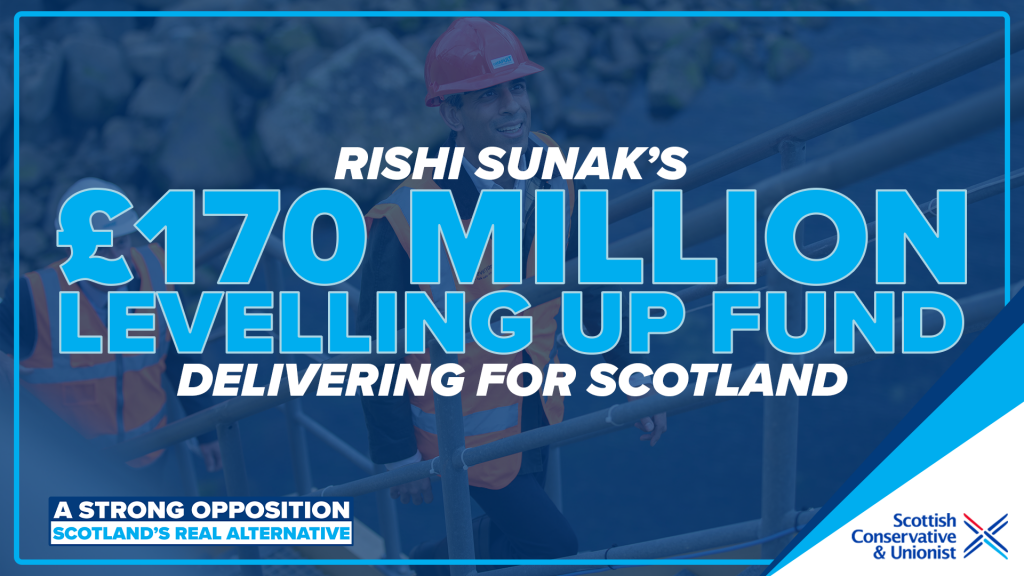 The Scottish Conservatives are calling on the SNP Government to stop creating grievance and embrace the Levelling Up Funding package for Scotland contained in Rishi Sunak’s budget.

SNP Minister Richard Lochhead will lead a debate this afternoon attacking the UK Chancellor’s £170million package for a series of infrastructure projects across Scotland – despite many of the successful applications coming from SNP-run councils, who have since welcomed the funding.

The Scottish Conservatives will argue that instead of trying to manufacture grievance over the Levelling Up fund – which was part of the biggest financial settlement Scotland has received since devolution – the SNP should be welcoming the package.

The Scottish projects to secure funding from Rishi Sunak’s Levelling Up Fund, included:

The UK Government’s Levelling Up Fund will invest £170 million in projects across Scotland to improve local communities.

Demonstrating the benefits of working together as one United Kingdom 🇬🇧🏴󠁧󠁢󠁳󠁣󠁴󠁿 pic.twitter.com/UujCBSkxJS

“The funding packages awarded via Rishi Sunak’s Levelling Up fund will bring massive benefits to a host of projects across Scotland.

“The Levelling Up fund is a great example of the UK Government funding costly infrastructure and regeneration projects, after bids were invited from local authorities across the country.

“It was great to see so many Scottish projects secure funding – and pleasing to see council leaders in the successful SNP-run authorities enthusiastically welcome their awards.

“But, it would be nice if, just for once, the SNP Government welcomed the Chancellor’s investment in Scotland, rather than finding excuses to complain about it.

“While the SNP have taken powers from local authorities during their 14 years in office, the UK Government is empowering communities by investing directly in innovative projects across Scotland. This ought to be welcomed by all parties.”