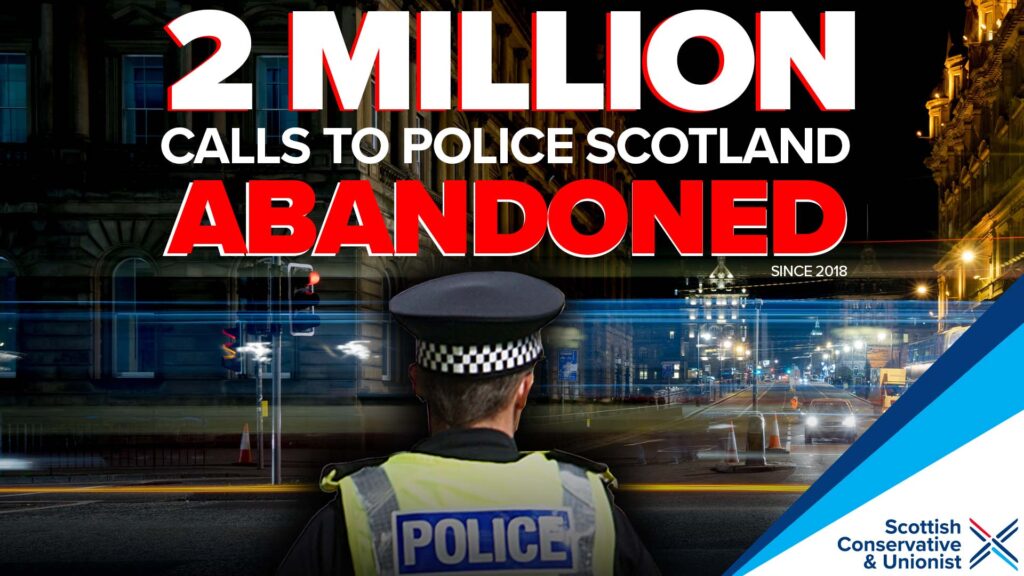 The Scottish Conservatives have revealed that almost two million calls to Police Scotland have been abandoned in recent years.

A Freedom of Information Request from the party revealed that a total of 1,862,957 calls to Police Scotland’s 101 number since 2018 were discontinued by the caller after they went unanswered for two minutes.

Shadow Justice Secretary Jamie Greene says the numbers are a “damning indictment” of the failures by the SNP Government to give frontline policing services the resources they need to protect the public.

A report from Police Scotland also confirmed that the average time taken to answer a call increased by over 16 per cent between 2020/21 and 2021-22 .

“These figures are absolutely staggering. Our officers are doing their best under severe pressure, but they are simply not being given the resources they need by the SNP Government.

“This situation is completely unacceptable and unsustainable going forward. We cannot have this huge volume of calls from members of the public going unanswered when they could be alerting police to serious incidents.

“We have seen tragedies occur before in Scotland when calls have been missed. These figures must be a wake-up call for SNP Ministers to guarantee officers can answers calls as promptly as possible. If not, this could again have devastating consequences.

“These statistics are a damning indictment of the SNP’s failures to fund our police. Ministers must urgently reverse their plans to hit police with yet another cut in this year’s budget and support Scottish Conservative calls for a significant increase in their capital funding.”

Page 15 of Police Scotland’s report for Q2 2021-22 highlights the increase in time to answer a call to 101: Police Scotland Quarter One Performance Report 2021/22

Paul Edie, a board member of the Scottish Police Authority said in August 2021 that those who didn’t get through to 101 weren’t even getting a ‘skateboard service’: https://www.bbc.co.uk/news/uk-scotland-58330072

The Scottish Conservatives have asked for a £36.5m increase to Police Scotland’s capital budget in the 2022-23 Scottish Budget.