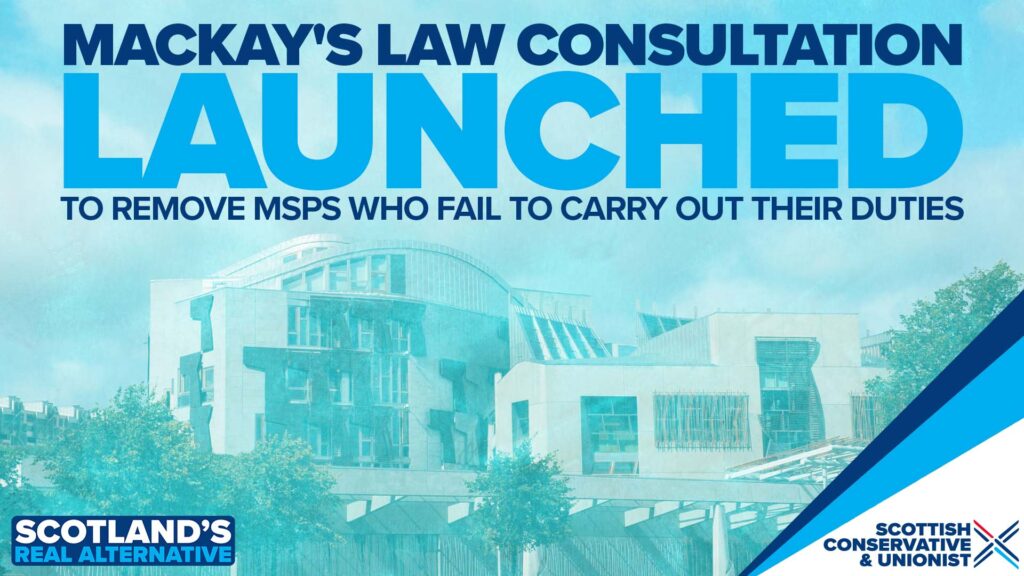 The Scottish Conservatives have launched the consultation period on a Bill that would enable the removal of MSPs who fail to carry out their duties.

Mackay’s Law, officially known as the Removal from Office and Recall Bill – being put forward by Central Scotland MSP Graham Simpson – allows for the dismissal from office of a member if they don’t take part in parliamentary proceedings for more than six months without a valid reason.

This would bring the Scottish Parliament in line with local authorities who already have this rule in place for councillors.

The Removal from Office and Recall (Members of the Scottish Parliament) Bill, Mackay’s Law, will focus on three areas:

These issues were highlighted most recently when Derek Mackay resigned from his role as Finance Secretary in February 2020 but stayed on as an MSP until the May 2021 election. During that time, he continued to collect a salary, despite not attending meetings or votes in parliament.

It was widely felt that Mr Mackay’s position as an MSP was untenable but, without the appropriate levers in place, there was no method to remove him from office.

Current legislation states that jail terms need to be longer than a year for an MSP to be unseated. That means that, had he not resigned, former Dunfermline MSP, Bill Walker could have carried on despite having been convicted of 23 charges of assault and a breach of the peace in 2013.

MSPs should be judged to the highest standards, and this Scottish Conservatives’ Bill will provide assurance to the public that MSPs can held to account for their behaviour.

“I am delighted to launch the consultation for this Bill which will address anomalies within our Scottish Parliament.

“The vast majority of MSPs enter politics to serve their constituents to the best of their ability – but in all parties there may be members who have abused their position or failed to meet the high standards expected of them. This Bill will provide the levers to remove them from office.

“The taxpayer should not be paying for an empty seat in the parliament debating chamber, nor should constituents be left unrepresented if their MSP is serving jail time.

“This Bill is common sense and would reassure the public that MSPs will be held to account for their misconduct, rather than being able to claim a salary while hiding away and running down the clock on their term. I urge fellow MSPs of all parties to back it.

The consultation will close on 13 April 2022