Know your Nats: A handy guide to Scotland’s noisiest minority 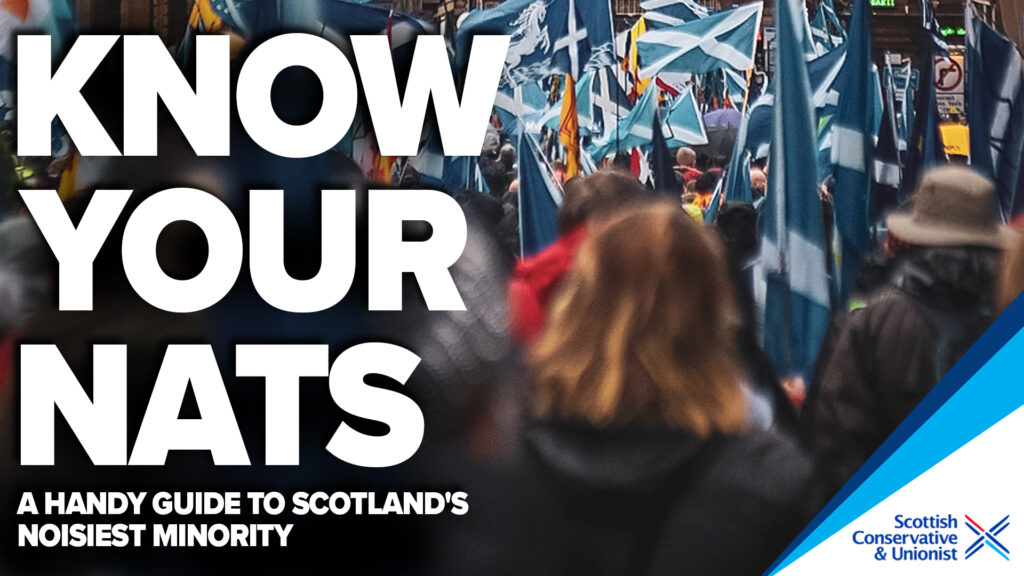 With thousands of delegates arriving from around the world, Russell Findlay MSP presents this tongue-in-cheek guide to the various types of Scottish nationalist.

The eyes of the world are on Glasgow for Cop26 where the only topic on the agenda should be the climate crisis.

But with tedious inevitability, Scottish nationalists will always find a way of pushing their obsession of breaking up the United Kingdom.

Our guests from around the world should be prepared, which is why they need this handy Cop 26 Guide: Know Your Nats.

Dreamers who believe in a Scottish socialist utopia. Free Caledonia’s citizens would be pampered by world-beating services of all kinds. Our young would prosper with universal educational excellence. There would be well-paid jobs for all (hey, have a four day week). The transport network would be comprehensive and green. Prisons would close as social workers use role-playing and pottery classes to turn criminals into model citizens. Oh, and free unicorns for all.

A lifelong political fury was forged after being beaten up by some English soldiers during national service in Aldershot in the 1950s. Come rain or shine they never leave home without their medals — enamel pin badges extolling glorious nationalism. They can often be found in supermarkets, re-arranging the newspaper display to ensure The National is in prime position. Having been viewed as Anglophobic eccentrics for decades, they now regard themselves as elder statesmen of the movement. They wince at Nicola Sturgeon’s sinister comments about pro-UK older voters dying off.

Middle-class couples on the public sector payroll who regard Nicola Sturgeon as progressive champion — despite her appalling record of governance. They love preaching to chums about their enlightened new homeland and virtue signal about paying extra income tax. Artisan sourdough in Hyndland and Stockbridge is even almost as good as in London. Crucially, they explain, Scottish nationalism is really not like other types of beastly nationalism. This requires extreme use of blinkers. If independence happened, they’d be back across the Border quicker than a scalded cat.

Without any encouragement, they will take you on a journey back in time to prove that Scotland is, in fact, already independent. Your will hear a confusing ramble comprising 11th century monarchs, the Stone of Destiny, dastardly aristocratic plots, fabled documents written in blood and Rosslyn Chapel’s carvings. Some may also use the alignment of the stars to state their case. Eccentric and shabbily dressed, if you get trapped in conversation with them, simply nod and smile.

Having gorged for decades at the trough of public money during Labour’s Mafia-like grip on civic Scotland, they seamlessly swapped their red rosettes for SNP yellow. Many were lured because the SNP also hates “the Toaaaries”. Usually found in family groupings, these porcine opportunists don’t give a toss about independence, knowing it would be an economic disaster, but they also know what side their bread is buttered on.

These middle-aged men with dreary lives and Marks & Spencer underpants fantasise about leading a heroic resistance movement against their colonial oppressors. Some will occasionally attempt to set fire to the “butcher’s apron” (aka what they call the Union Jack) but the closest most of them get to direct action against the British sate is going on Yes marches and tweeting furiously when supermarkets sell Scottish strawberries with a Union Jack on the packaging.

Outwardly reasonable and respectable, their uniform comprises thick glasses, tweed blazers with elbow patches and brogues. They never talk about the “butcher’s apron” or express Anglophobic comments. They have little time for most other types of Nat who view them with deep suspicion. But this intellectual facade is what makes them so dangerous. They retain their slightly creepy composure when confronted with the economic reality of ripping Scotland out of the UK.

The most extreme of Nats who want Scotland to unilaterally declare independence, then take up arms when tanks roll across the border. They use the racist term ‘House Jock’ to describe the majority of Scots who are pro-UK. They believe that Scotland’s waters contain vast secret oil reserves and that the SNP has been captured by the British Security Services. When Nicola Sturgeon’s husband Peter Murrell said he saw a magpie in his garden while giving evidence to parliament last year, this was really a coded message to MI6. One day, they believe, King Alexei Salmond of Russia Today will return.

They believe our planet is dying and that we may already have passed the point of no return. But there remains one tiny chance to save the world…and that is for our small country of just over five million people in the northern edge of Europe to separate from the most successful political and cultural union in history. As the UK is a world leader on climate change and is hosting COP 26, this divisive nationalism puzzles mainstream Greens elsewhere in the world.

This article originally appeared on scottishdailyexpress.co.uk on 1st November 2021.