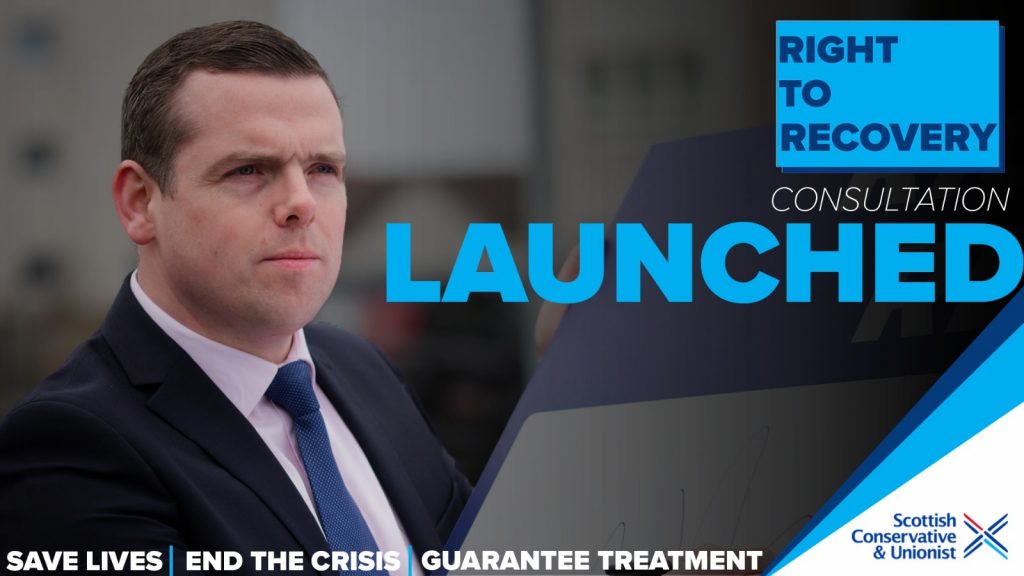 The Scottish Conservatives have taken the next steps to bringing a Right to Recovery Bill, written and developed by frontline experts, into law.

On Thursday morning, Douglas Ross published the consultation for a Right to Recovery Bill, which would guarantee everyone who needs treatment for addiction can get it.

At First Minister’s Questions, Scottish Conservative Leader Douglas Ross called on Nicola Sturgeon to throw the weight of the government behind the Bill.

The Member’s Bill, which was written by frontline experts including FAVOR Scotland, is already backed by at least seven recovery groups.

Scottish Conservative Leader Douglas Ross said: “Our Right to Recovery Bill proposal has been developed by frontline experts to guarantee everyone gets the treatment they need.

“The consultation process is the only way an opposition party can progress a Bill – but the government could throw their full weight behind it right now and rapidly speed up the process.“It is extremely disappointing that the First Minister won’t come on board with the Bill proposal at this stage, although we will keep trying to convince her of the need for a right to recovery.

“The Scottish Parliament passed Covid laws in three days because the government acted. We can introduce a Right to Recovery law swiftly if we adopt a similar sense of urgency.

“Drug deaths are our national shame. We lose far too many people each year.

“The system is broken, it is leaving people on the streets to die. It must be overhauled by enshrining rights in law immediately.

“I look forward to going on a visit with the First Minister, so we can both hear directly from grieving families and frontline experts about why the Bill is so incredibly important.”

The original Bill proposal is here.