Skip to content
Scottish Conservatives
News
£4.6 billion reasons why the SNP have nowhere to hide

£4.6 billion reasons why the SNP have nowhere to hide 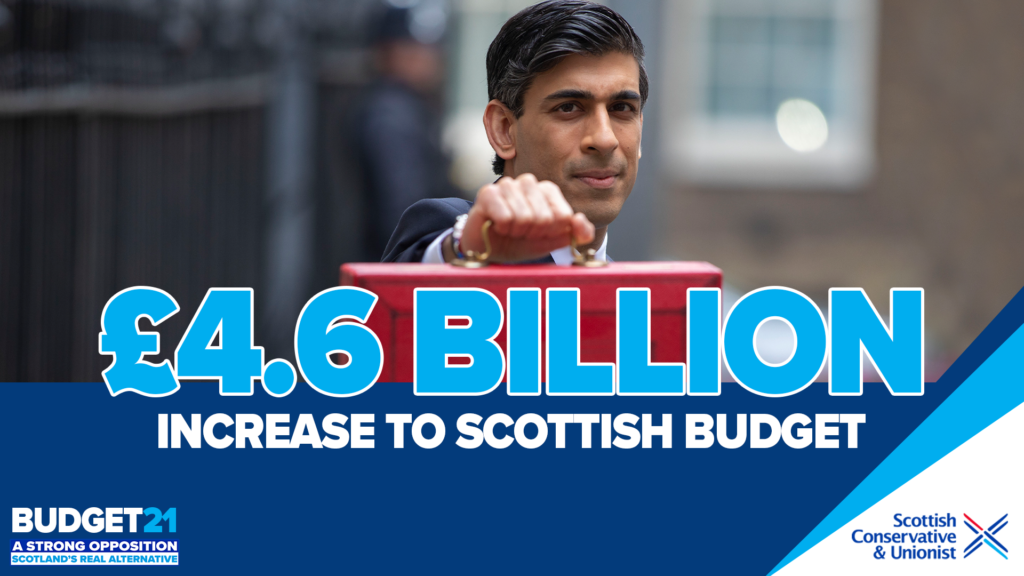 DEFLECTION is something of an SNP speciality.

But even diehard nationalists are going to find it hard to deflect blame onto the UK Government after Rishi Sunak’s budget yesterday.

The latest UK Government Budget gives Nicola Sturgeon and her nationalist government in Edinburgh absolutely no room to try and blame anyone else for the SNP’s own failings.

Rishi Sunak has delivered a no excuses budget.

The UK Chancellor delivered the biggest block grant since devolution. He has provided an increase of £4.6 billion to the Scottish Budget. After years of blockbuster Covid spending, he has once again stepped up and provided an outstanding funding guarantee to support Scottish jobs and public services.

He’s done such a first-rate job with this latest Budget that he’s ensured the SNP cannot possibly now complain about a lack of funding. There is no way they can credibly try to pretend that they’re short of cash when the block grant provided by the UK Government to the Scottish Government is at the largest level in decades.

The onus is now entirely on the SNP to start fixing the problems they’ve created over their 14 years in power. They’re out of excuses.

Of course, the SNP will still find something to manufacture into a constitutional grievance. They’re experts at it. It’s what they do.

And already, they’re complaining about the £170 million of direct UK Government investment into Scotland through the Levelling Up Fund.

They are genuinely objecting to the UK Government providing cash directly to councils so that they can properly invest in local services.

The SNP have cut council budgets to the bone over their 14 years in power – and now they’re complaining that the UK Government is making up for some of that funding shortfall. They don’t just want to cut council budgets, they want to keep them down, all because it doesn’t suit their narrow political agenda.

The UK Government is trying to help councils fund exciting and innovative local projects – but the SNP are complaining that it’s the wrong kind of money. It’s UK money – and that doesn’t fit with their endless attempts to provoke division and spike grievance.

The SNP position is made even more ludicrous by the fact that some of their own SNP-run councils applied for this funding, just as they should.

The Levelling Up Fund is a great initiative because it recognises the fundamental fact that local people always know what’s best for their own local communities. That’s a core principle that I firmly believe in.

Wherever it’s possible and practical, local decision-making is best. Nobody knows their own community like the people who live there day in, day out. The Levelling Up Fund doesn’t just recognise that – it rewards local projects with the investment they need to thrive.

All over Scotland, the Levelling Up Fund will help local people revive and rejuvenate their local area. Yet in the SNP Government’s world, this is not a good thing because it’s the UK Government who are delivering for people in Scotland.

The contrast between the UK Government’s approach and the SNP-Green coalition of chaos approach couldn’t be clearer.

Where the UK is putting money in the hands of local communities and empowering local people to decide best where and how funding should be spent, the nationalist government wants to hoard it in their coffers in Edinburgh and dictate how it is used from Holyrood.

Where the UK is investing in infrastructure and helping to improve Scotland’s road network, the nationalist government seems determined to force drivers off the road. The Greens damaging influence is already very apparent. Their extremist positions on car use is already starting to gain more traction at the heart of government.

And where the UK is fully supporting working people by protecting jobs and backing small business, the nationalist government are alienating businesses more and more each day. They don’t listen to businesses and jobs are never their top priority.

The SNP are usually so fond of trying to set up a contrast with the UK, almost always based on false pretences. This time, Rishi Sunak has scuppered their attempts to do so at the outset.

This UK Budget set out a clear direction of travel for restoring the economy of Scotland and the whole United Kingdom after the damage of Covid. It was a much more optimistic Budget than anyone was expecting as we start to move on from the pandemic. The doommongers and naysayers will undoubtedly be disappointed at just how much Rishi Sunak got right, especially for Scotland.

And there wasn’t only a fuel duty freeze, the whisky industry got a boost too from the cancellation of the planned increase in spirit duty. In my home of Moray the whisky industry is a major local employer and this duty freeze will help protect those jobs and give the industry a platform to flourish. We still need to do more to support the whisky industry but this move means we will have the opportunity to do so from a position of strength. I had personally urged the Chancellor to freeze the duty on whisky and I am delighted he listened.

Another personal highlight for me in this Budget was the inclusion of funding to help bring major events like the men’s football World Cup and women’s Rugby World Cup to Scotland. If we can get the bid right, I’m really hopeful we can bring the beautiful game home to UK shores. And if we manage that, I’ll be lobbying hard for the final to take place in Glasgow. It will be too late for me to officiate the match but that won’t stop us doing whatever we can to get that game at Hampden Park.

All in all, this was a UK Budget that provided so many positives for Scotland and all of the United Kingdom on so many fronts. It was an overwhelmingly positive Budget that gives working people the opportunity to thrive.

The funding is there to protect public services. The money has been delivered to keep Scottish jobs safe. And the investment has been provided to start laying the foundations of future Scottish and UK success stories.

Once again, Rishi Sunak has delivered. And by doing so, he’s left the SNP out of excuses.

Now it’s time for Nicola Sturgeon to step up, stop deflecting, and start delivering for people across Scotland.

This article originally appeared in the Scottish Daily Mail on 28th October 2021.